You folks got a sneak-peek (So far, folks = 0, so this is just me future proofing out of sheer optimism!) at my Catachan Kill-Team.

When I was deciding what to play for Kill-Team, there really was only one option for me; Good old Poor Bloody Infantry. But while my Vostroyans are beautiful models, they didn’t strike me as the kind of regiment that engaged in special operations regularly. Its not that they don’t, there is enough lore and fiction about them that says otherwise, but specifically MY Vostroyans are a siege regiment, set up to pound a position to mulch in a time-frame of months, if not years, and through sheer attrition. Ask them to take an entrenched position, and they’ll do it with bayonets fixed and a prayer on their lips. But for clandestine warfare, I felt like something else. 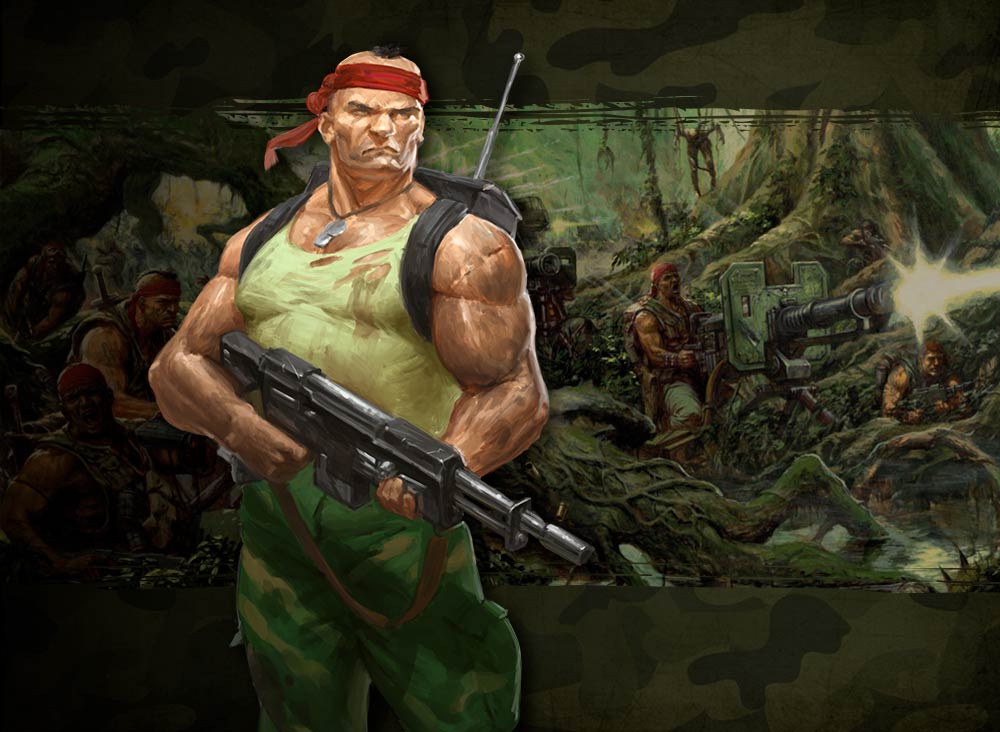 Enter the Catachans. Tough, individualistic and self-reliant. In open warfare, they’re just as good as normal line infantry. But in jungles, be it actual ones with trees and scorpions the size of houses, or urban ones with tight networks of sewers and alleyways, They’re better then most.  Perfect for Kill-Team. I never wanted to do a whole army of them, but a squad or two? Kill-Team offered the ideal excuse, and I think that was Games Workshops intention, so me-0-them-1.

However, the Jungle Fighters kit is OLD, very old, around 1998 if I’m not mistaken. and good lord the paint scheme on the web-store isn’t doing them any favors, with its very 2nd-3rd edition style of extreme highlights. 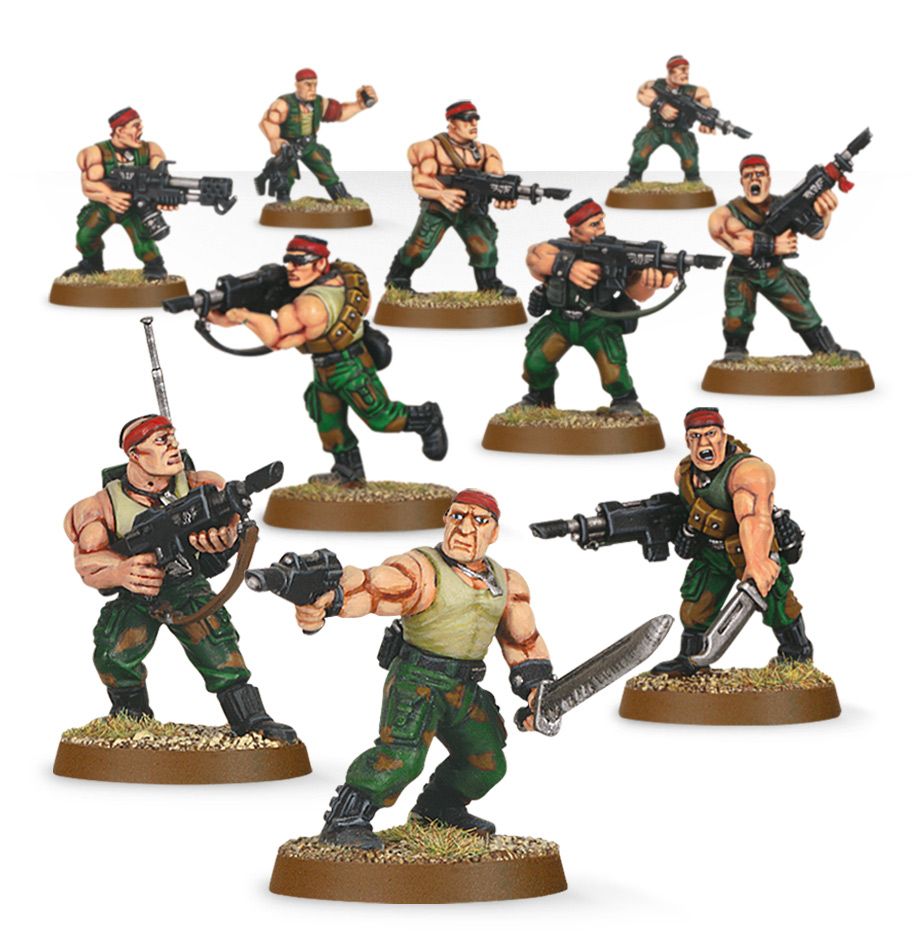 Luckily, the command kit is far newer, and looks amazing!

So I bought one of each, and set to work. The older kit was a dog, and immediately put me off the idea of ever doing a full army. The newer kit was much better, and went together like a charm. And between both, I had 12 kitted out Jungle Fighters! Fair tip to anyone with the same idea; use the best plastic glue you can get, and that isn’t the GW stuff. I swear by Tamiya Thin, and it has a brush applicator. Use that to smooth out the join between muscle, lasgun stocks, and torsos.

The old kit, given a bit of TLC, actually doesn’t look bad at all. Trooper Caulfield here is 100% old catachan kit, and looks the business! After a marathon assembly session with Rambo and Predator on in the background, I had them all ready for paint.

And this would have been it, at least for a while. But, having followed the Campaign rules to put them together, I hadn’t thought of doing a matched play version of the list, leaving me almost 30 points short. While having less points gives you more command points to use in the actual game, I figured having more bodies would help more in the long run, especially since you get command points anyway every turn! But, while I had a few catachan bodies left, the poses they offered looked really meh. So, I figured the Catachan boys were on a rescue mission, and had picked up a couple of Scion lads! 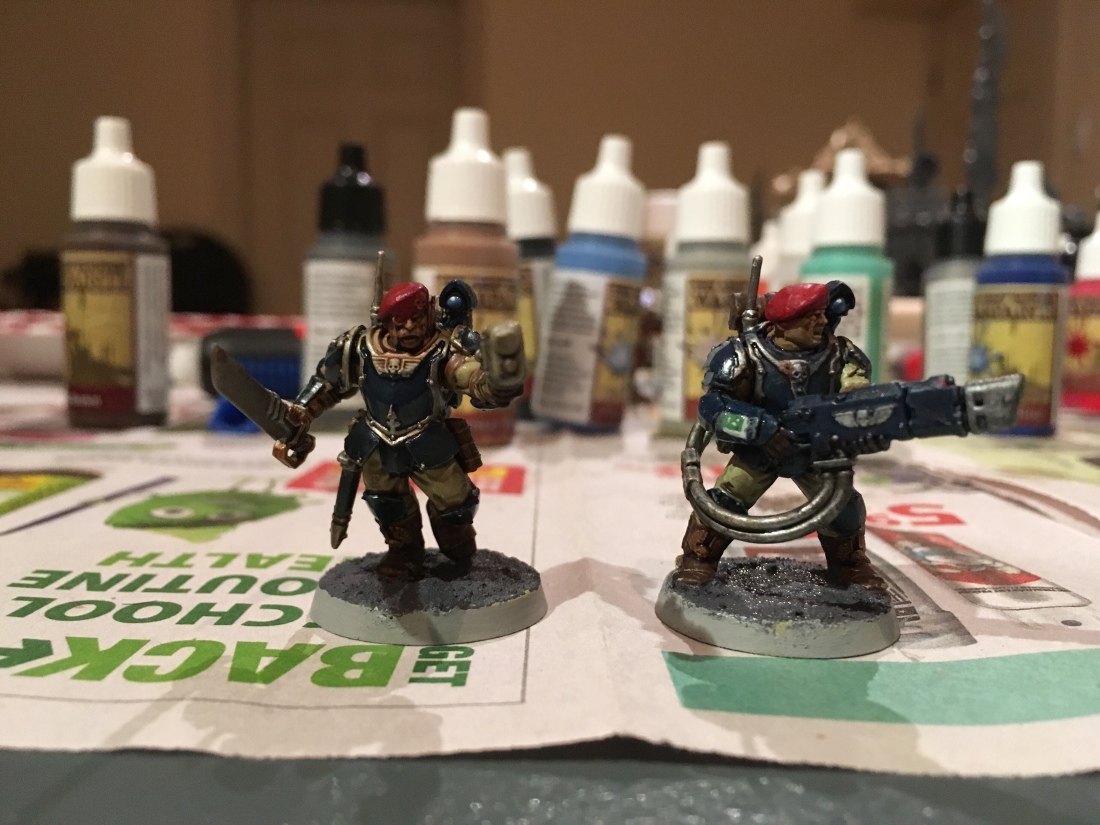 Now this kit is really divisive. Half the people I talk to love the kit, me included. It has that distinctly gothic insanity of the Imperium nailed to a T, and bringing back the beret heads from the ancient plastic stormtroopers kit from 2nd was a stellar move by GW’s sculptor.

However, the other half of people I talk to LOATHE the kit, for much the same reasons why I like it; that Gothic insanity. To be fair, the two kits that were phased out in favour of scions were beloved by many, especially the cadian styled Kasrkin. These were more traditionally sci-fi and military in comparison.

I can’t say that the latter group is entirely wrong, the Kasrkin were gorgeous models. But they suffered badly from being so distinctly Cadian in appearance. They didn’t have their own identity, and while they fit in really well with the Cadian Shock Troops, they never really worked for anything else unless you were willing to convert them, and since they were metal that wasn’t the easiest thing to do. The 3rd Edition sculpts are more generic, and were the ones I preferred back when I was first getting into the hobby. But they suffered from wonky scaling issues and again, being metal meant if you wanted weapon options that weren’t a distinct model, out came the Dremel and clippers.

So, rambling on aside, the Scion kit is very characterful, and full of great bits for every Guard player, and being the sucker I am I’ve now amassed far more scions then I’d ever actually use. Using two of them for Kill-Team actually meant them seeing the table, and 2 almost exactly put me at 100ish points (I’m actually 98 points, but I don’t feel the need to spend that extra two).

I’ve yet to actually play a game with them, but I’m looking forward to it! Lots of bodies, and plenty of special weapons without going into the plasma-spam cheese of the month. I’ll be sure to take pictures!

Its not all Kill-Team though. About 2-3 weeks before starting this blog I began cracking away at my Vostroyans, and starting with the command squad, I have the Vox, Banner, and Company Commander done. You saw the company commander yesterday, but heres the other two! 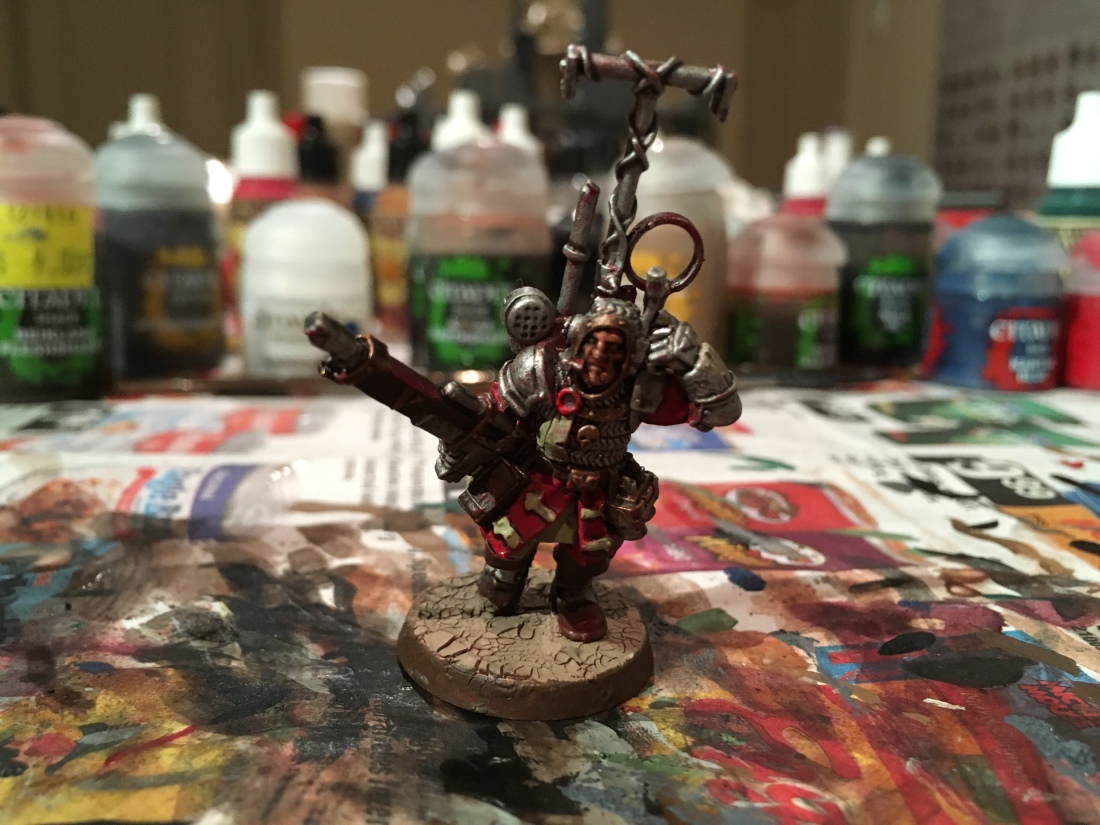 The banner needs freehand writing work, but the models are beautiful and really take well to paint and washes, so they’re not as intimidating as they first appear. I just have the grenade launcher, which to be honest is of dubious value and may be replaced by a sniper, and the medic with his lovely massive syringe. I look forward to sharing them!