“We shall wage this war with undaunted faith and courage. We shall not take one step back. This is the Emperor’s world and we will not surrender it!”-Lord Marshall Toshenko, Vostroyan XVI

The tournament date of March 30th fast approaches, and this has given me quite the proverbial kick in the pants to get my list painted! An oddity for a guard player, my list actually only has 50 infantry models in it, consisting of 4 Infantry Squads, a Command Squad, a Commissar, a Platoon Officer, and the command staff of a Company Commander and a Lord Commissar. A Vindicare assassin has found his way into the list, as his sniping ability could very well be crucial, and using March’s White Dwarf assassin update makes him quite dangerous.

Of these models, all but the Infantry Squads are painted already, a small dent in the total 100+ strong Vostroyan army I’ve collected over the past year, but a significant portion of my tournament list. The reason for only taking 40 is two-fold; firstly by painting 40 Guardsmen for the list, it knocks out half of my 80 total Infantry Squad models to paint, a major milestone for painting the lot. Secondly, it left me plenty of room to take those shiny planes I showed off a couple days ago. Oddly, I find myself essentially taking a variant of the Loyal 32, a term used to describe the fact that somehow every imperial player is taking 3 Infantry Squads and 2 Company Commanders for +5 command points, for a very cheap cost in points. In my case, my Guard force is substantially smaller then normal to accommodate the aircraft, but big enough to grant me that crucial 5 extra command points, and still a viable enough threat that it can’t be ignored completely.

Now, I was going to paint 2 Wyverns yesterday, but a goof up in a Facebook group chat, by me reposting old content, led to a joke that in penance I should paint up 10 Guardsmen, followed by a prayer to the Emperor*. Of course this was all in jest; but for some reason, it got me thinking. By painting the slog of Guardsmen first, leaving the relatively easy tanks for last minute, my army would look that much better on the tournament date. Properly motivated, I set to work. 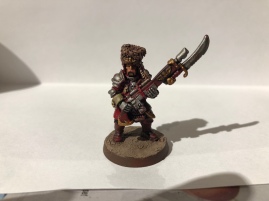 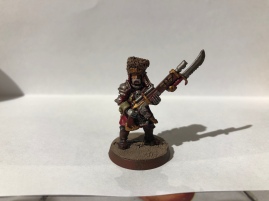 As you can see, I held up my end of the bargain. 10 painted and based Vostroyans, ready to march to war on the 30th. Now, they are done up to my personal best, which I know is quite a low standard. But they are easily tabletop quality, and when you have this many more guys to paint over the course of a week and a bit, quantity has a quality all its own. Looking at each model individually, you can see the lack of highlighting and while I at least try to paint within the lines, it has rough edges. But ranked up…

They suddenly look far better. This is the real secret to painting a horde army, even one as ornate as the one I’ve chosen; Paint well enough that they look good together and suddenly it raises the standard on all of them.

Another problem was also solved here. While they were just undercoated, as the clubhouse I attend doesn’t have a strict painting policy, I gamed with them anyway. But quite often squads would get mixed together, taking a minute or two to fix. That is OK at casual club matches, but it tournament rounds of 2 hours each, slow play just isn’t acceptable. With that in mind, I thought about squad markings. On Cadian models, one could easily paint a piece of uniform a squad color, but those models also have features that carry over the whole squad, like shoulderpads and armor. But Vostroyans are surprisingly not as uniform as you might think. Armor trim, chainmail, even pouches vary wildly on each model.

So, I used the base. By painting a simple block of color on the otherwise drab brown rim of the base, I can easily identify from behind which squad is which. I can’t remember if I saw this idea somewhere before, so I can’t claim credit for it. But it should work really well.

All in all, a good nights/mornings work. I think today I will tackle another Squad. I learned a few tricks to save time in the process of painting these initial 10, things that I didn’t learn when painting the officer corps individually. Now that the squads will be individually marked, it’ll be even easier to keep track of their exploits on the battlefield, and maybe even earn some of these boys a name to remember them by. Or they could all die in ignominy, face down in a ditch. The dice give, and the dice take away.

But until next time,  Ave Imperator, and happy war-gaming!

*Oh, but don’t think I’m slacking on that last part!

Adore the Immortal Emperor For he is our Protector

Admire the Immortal Emperor For his Sacrifice to Mankind

Exalt the Immortal Emperor For his strict guidance

Revere the Immortal Emperor For his undying guard

Venerate the Immortal Emperor For his Holy Wisdom

Honor the Immortal Emperor For his Eternal Strength

Glorify the Immortal Emperor For his All Seeing Vision

Praise the Immortal Emperor For his Unending rule

Hail the Immortal Emperor For he is Lord and Master

Worship the Immortal Emperor For without him we are nothing

2 thoughts on “More Sons of Vostroya join the fight!”

www.wargaming3d.com/
Scent of a Gamer

Some truly badly painted minis and maybe one or two ok ones.