Hey folks! It has been a while, hasn’t it? Honestly, I’ve been busy with a new puppy, but in the end the real reason I haven’t blogged in a while has been a simple case of hardcore writers block. However, inspiration has finally returned to my addled brain! So without further fanfare…

“We had planes. We flew them. They had planes. They flew them. There was some shooting involved. All that mattered, really, was who was still flying at the end of it.” – Major August Kaminsky, (73 Kills)-Dan Abnett, Double Eagle.

In March, I wrote a post about the Aeronautica Imperialis, the sub-division of the Imperial Navy dedicated to atmospheric aerial combat. In it, I mentioned my deep love of the lore surrounding this very particular branch of the Imperial Military, and how I had amassed quite the little collection of aircraft. The idea of owning a full squadron came up.

Despite what I said previously, owning a full squadron is actually quite a mad idea, with each fighter costing me a significant chunk of change! However, it wasn’t like Games Workshop was going to release a new version of their original aerial combat game, Aeronautica Imperialis(by Forge World), anytime soon.

Oh, how wrong I was. How happy I am to be wrong. With surprisingly little fanfare, a new version of Aeronautica was released, now played on a hex board as opposed to free-form movement. Now in plastic, and in glorious detail. I was sold pretty much immediately, and on a quiet Saturday in Hanover I picked up the starter box, and started to assemble the contents.

I’m happy to report that the miniatures are absolutely gorgeous, lacking little if any difference other then size to their big brothers in 40k proper.  While quite fiddly to assemble, they were by no means hard, and 3 hours later I had a wing of combat aircraft ready to make Ace status. The Orks, which didn’t really interest me other then as an aggressor squadron to demo with, were actually the highlight of the assembly process, as much of the smaller sub-assemblies can be put together in various configurations; this has no effect on stats, but goes a long way in making your Dakkajets and Fighta-Bommas look distinct from each other.

Bed Assembly! Such a bad idea, but so comfortable! 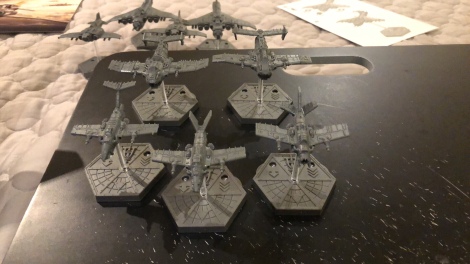 WAAAAAAGH! The Orks were a delight to assemble. 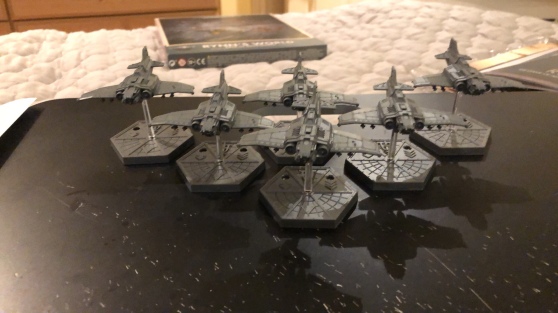 I picked up a box of Thunderbolts as well, leaving me a total of 4 normal and 2 Furies.

“Looking for missile lock” I went for air-to-air weaponry on my fighters.

Now as far as scale goes, I can go a little further then most and show a side by side with the Forge-World versions! My hobby space looks like the Blitz has been through it, so the pictures are not as great as I hoped, but the reconnaissance photos will have to do! 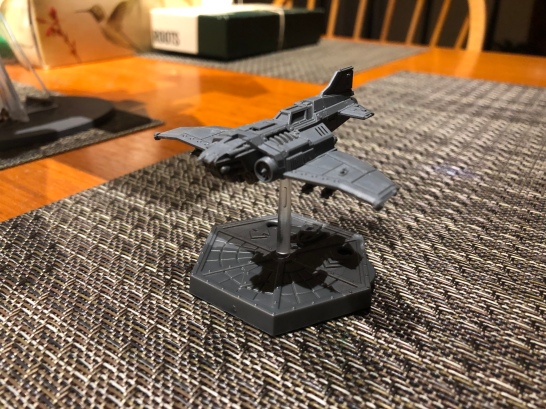 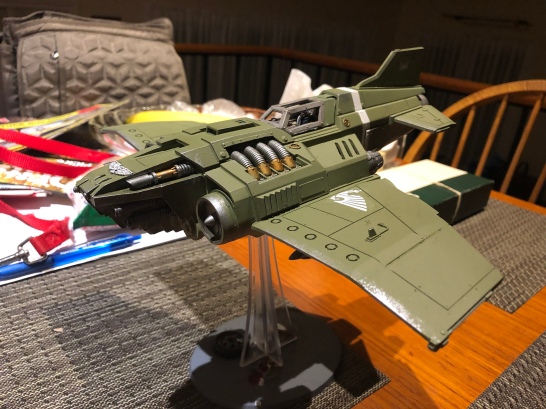 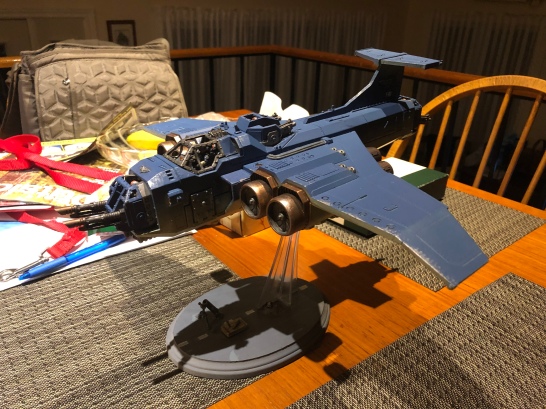 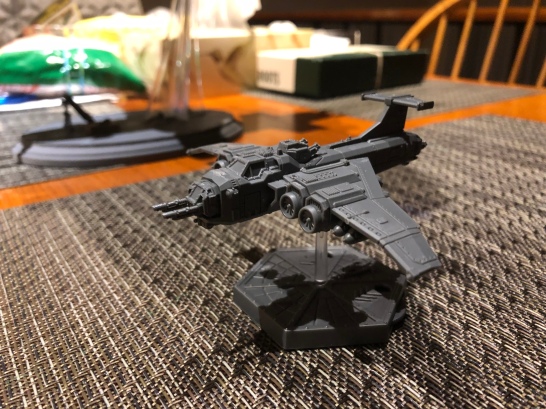 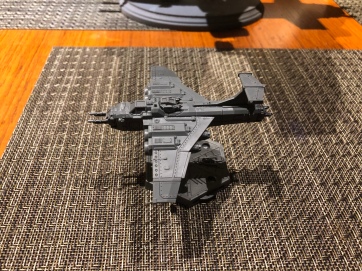 Now of course, these aircraft are not just display pieces, so I wrangled a couple of guys to play with at the clubhouse. One was not as enthused about the rules, something I will go into detail about later. The other took to it like a duck to water, and was soon shooting down my poor Navy fly-boys in droves! Tyler, my second opponent, had also just made some flame markers for Dungeons and Dragons, which pulled excellent double duty in making the battlefield come to life! 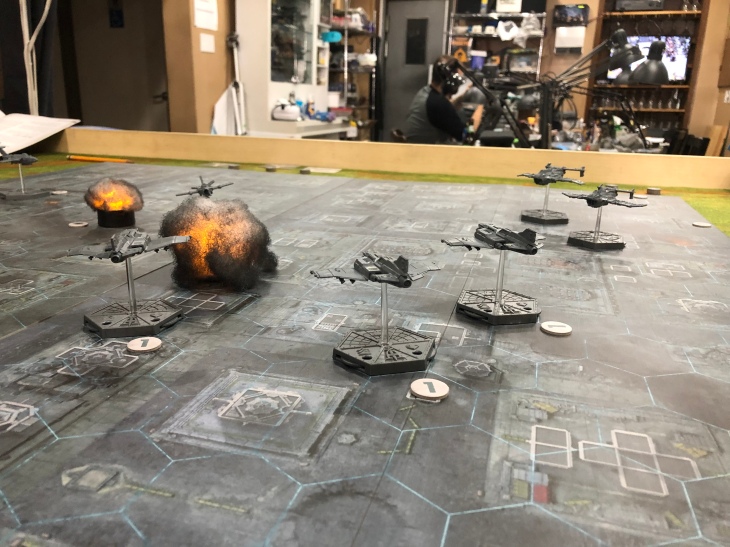 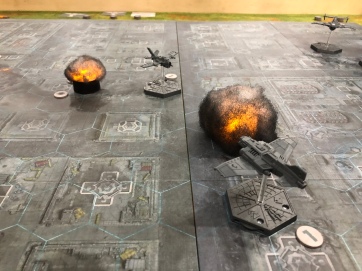 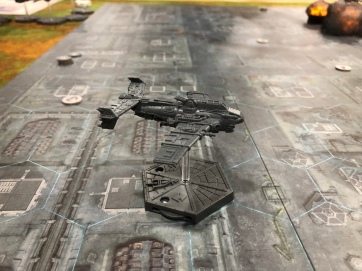 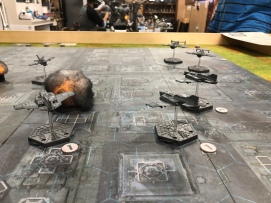 Kudos to Tyler for making these amazing fireball markers!

Now, while I don’t mean for this post to be an in-depth review, it would go against what I believe to say its all sunshine and roses at 40,000 feet; there are some pretty major things that ought to be said.

Mainly, the rules in the starter box; They are not the complete rules needed to properly play the game, nor is the included play area particularly durable, or even a good size. The rules are more of a quick start, with the core rules, including ground attack objectives and certain upgrades for aircraft being in the Rynn’s World Campaign supplement, available separately on release. This is particularly odd, considering that the starter set comes with 2 Marauder bombers, which while far from useless, are definitely not dog-fighters, could certainly do with having something to bomb! Even the Ork Fighta-Bommas could do with having another job to do, other then dog-fighting.

Secondly, the included play area is also a little too small, and isn’t very sturdy. The far superior Rynn’s World board, also a separate purchase, is far superior in quality and is a much better size to play up to 100 points on.

The rules are playable, just lacking. If the Rynn’s World Campaign book didn’t have the rules in it, and a separate rule-book was available with full content, I would have purchased it, had I known. It was only days from release when it became known that the starter, while an excellent value for aircraft and tokens alone, was not the full experience. I did end up purchasing the board, as it was far more playable. The Campaign book is reasonably priced, and I will be picking it up. I don’t feel cheated as much as I feel underwhelmed.

Beyond that, I found the game engaging and fun, as did Tyler, my primary adversary so far. Paul, the owner of the clubhouse I attend, made the observation when we played that the game feels less tactical then X-Wing, as maneuvers are far more lenient and forgiving. Tyler found the opposite, finding them fun and engaging to use. This is an interesting observation, being that Tyler isn’t a tabletop gamer outside of Guild-Ball, and Paul is a veritable tabletop veteran, having played many games. This differing outlook is very interesting, as is something I will study and report on more once I get a few more games under my belt!

Now, to wrap things up! I know I have lapsed on my blogging lately; the writers block and my sudden lack of motivation to build and paint as prodigiously as before came fast and hard after Miniwargaming, but as I am returning there in December I need to bring something with me to play with them, and it has to be painted! Hopefully this means more regular content, at a more constant volume. For those of you checking in occasionally, I hope you will enjoy what I’ll be putting out! But for now, Check your six, and happy war-gaming, wherever you are!

Wargaming battles of the Victorian era with toy soldiers

State of the Imperium in the Empire State